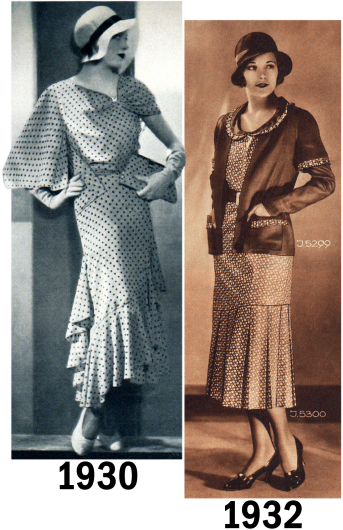 The fashion of the early 1930s shows a departure from the androgynous fashion of the previous decade and a rediscovered penchant for feminine lines. The independent, wild flappers of the twenties become elegant ladies in the thirties, characterized by ladylike restraint and discreet femininity. A social change to conservative values and views was already apparent in the late twenties and was significantly intensified by the world economic crisis from 1929 onwards. The young girls and women who experienced the effects of the First World War at first hand have grown older and the immediate impression of the World War has faded. A new generation has grown up who did not consciously experience the First World War. As so often in history, after a period of radical innovation comes a period of restoration - a return to old, traditional values.

The beginning of the world economic crisis in October 1929 had little effect on the fashion industry. Magazines and mail-order companies take little notice of the worsening economic situation for the time being. It was only in the second half of 1930 that many American mail-order companies were forced to take action in the face of a drastic drop in sales. While some mail order companies such as Sears, Roebuck and Co., Montgomery Ward or National Bellas Hess drastically reduced their range of goods, others such as Hamilton Garment and Co. disappeared from the market or merged with other mail order companies such as Charles William Stores in order to survive the economic crisis.

Many magazines also lose not only subscribers. Many companies are massively cutting their advertising budgets or doing without advertising altogether. The Ladies Home Journal, the largest US women's magazine, which before the Great Depression had a monthly circulation of up to 250 pages, shrank to less than 100 pages per issue by 1932 because of the lack of advertising customers. Tailoring, mending and re-cutting old clothes and not buying new ones became a necessity in the early thirties. Nearly every women's magazine offers patterns for their buyers to support them and keep them as readers.

Two covers of the U.S. mail order catalog giants with the Blue Eagle emblem of the NRA, which was created as part of the New Deal policies to fight the Depression — Montgomery Ward and National Bellas Hess 1933-34 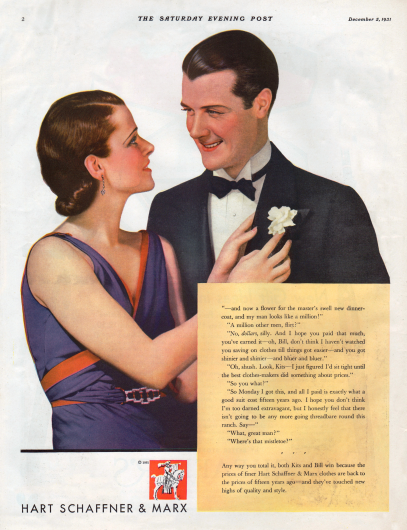 Not only in the German Reich but also in the USA the political situation changes in 1933. On March 4, the democrat Franklin Delano Roosevelt takes over the presidency as successor to the outgoing Herbert Hoover. His new New Deal policy includes a wide range of government intervention to support economic recovery. Many new state agencies are created, including the NRA (National Recovery Administration) which, among other things, enforces minimum wages and even the setting of minimum prices, thereby seriously interfering with the free market. As a sign of support for trade and industry, from 1933 onwards the sign of the Blue Eagle appeared in shop windows, advertisements and on the covers of mail order catalogues and magazines with the caption "We do our part".

The economic situation in the USA begins to recover only slowly in 1933. The deflationary price spiral is stopped, not least because of the fixing of prices by the New Deal policy and the rising demand. The American mail order company Montgomery Ward, for example, announces "Commodity Prices have gone up 50% to 150% - Yet Ward's prices are low" and tries to get customers to buy.

Despite the economic hardship and the financial restrictions during the world economic crisis, the development of fashion does not come to a standstill, although one might suspect just that. All parts of society try to keep up with fashion as best they can, which is an argument for the importance and social significance of fashion that should not be underestimated.

The New Femininity In Fashion 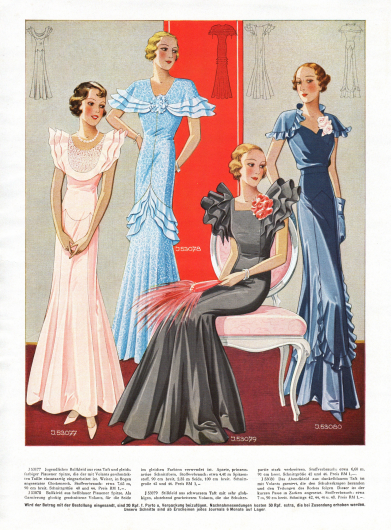 Protruding flounces lead to a visually broadened shoulder area, which is reflected above all in evening wear — Modenschau No. 253, January 1934 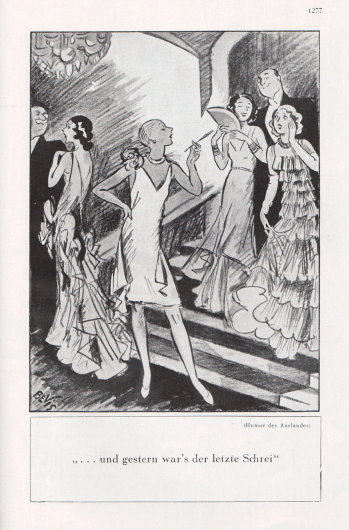 The fashion of the twenties in caricature: "... and yesterday it was all the rage". What was particularly chic in 1927/28 already seems ridiculous by 1930 — Revue des Monats, October 1930. Humor of Foreign Countries. Sketch: Bevis.

In 1930 the so-called new silhouette, which had already been in evidence in women's fashion since 1928, finally asserted itself. The years 1930 and 1931 are characterized by a new feminine fashion and soft lines, which emphasize female curves again and propagate charming femininity instead of sober sportiness. Characteristic of this new line of fashion is a high, ever more pronounced emphasis on the waist between 1930 and 1932, bell-shaped wide and pleated skirts and significantly longer skirt hems, which reach calf length again by 1932.

But the change in fashion is particularly evident in evening wear. In evening dresses, the hems of the skirts become floor-length again. The very high Empire waist becomes modern again. But above all, the evening fashion of the early 30s shows an increased need for luxury, which is in complete contrast to the economic situation. This is the conclusion of the 1st autumn fashion magazine of the magazine Die Dame No.26 from September 1930:

"it is a principle of experience that has proven itself again and again in the course of historical times: the worse the actual financial situation is, the greater the pomp and splendour of fashion."

Designers and couturiers experiment with fashion styles of the 19th and early 20th centuries, especially in evening wear, which are naturally adopted in modified and toned-down form and, after a time lag, also find their way into daywear.

On the other hand, a new trend that will determine the fashion of the 1930s became apparent from autumn 1931: beginning with high, wide fur collars and spiral fur trimmings on the lower sleeves of coats in the winter of 1931/32, through capes, double collars, shoulder and sleeve flounces in the summer fashion of 1932, to puffed sleeves in all imaginable variations for a wide range of styles.For dresses of all times of the day and for all occasions, which finally become indispensable in winter fashion in 1932/33 and take on more and more grotesque forms in 1933 and 1934, there is an increasingly pronounced tendency to emphasize the upper body and shoulders.

The reason for this newly discovered fondness is mainly due to the fact that the wider and fuller shoulders make the waist and especially the hips appear narrower. But one also wants to contrast the longer lower body with the longer skirt hems and thus make the upper body appear larger.