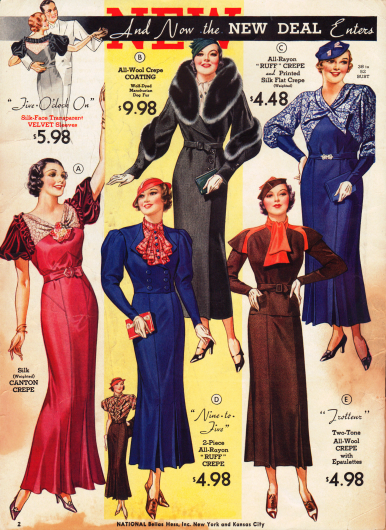 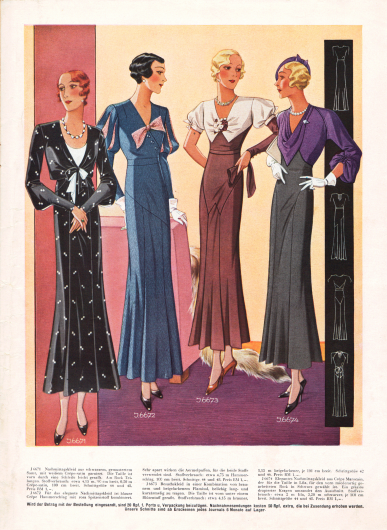 Afternoon dresses in velvet, crepe hammerschlag and crepe marocain and a visiting dress in flamisol — Modenschau Issue #242, February 1933, p. 28a 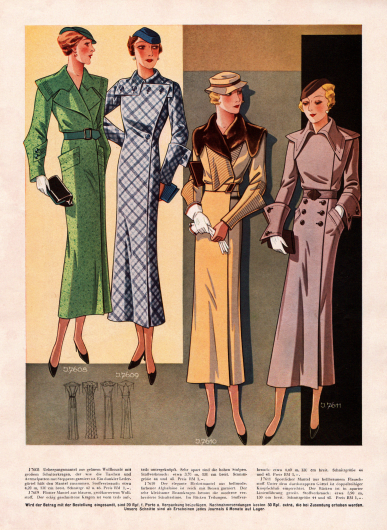 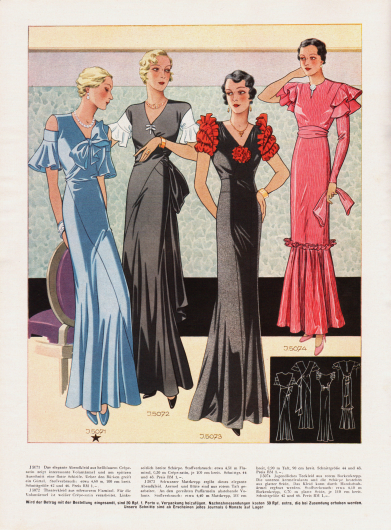 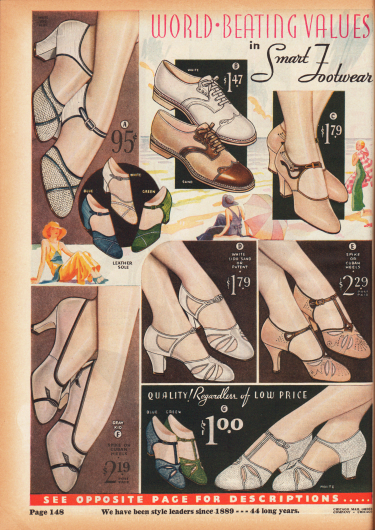 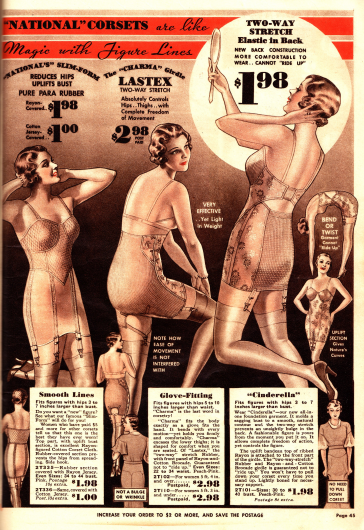 Strictness and common decency are an undeniable fact in the fashion of 1933. The soft and feminine silhouette of the early 1930s is gradually becoming a thing of the past. It is displaced by emphatically angular and broad shoulders, puffed sleeves in all possible variations, very tight and high waists and very small, on one side half pulled into the face, hats, berets and turbans.

In the daytime fashion, all kinds of puffed sleeves appear and you can find pleasure in the new unusual silhouette. The current women's fashion is based on the fashion of the grandmothers of the Victorian and Wilhelminian 1890s and makes no secret of it. Dresses without sleeves or special shoulder accentuation, such as the trotteur dress, which is part of the basic equipment of comfortable, urban women's wardrobe, are rather the exception.

The general fashion line of 1933 is still extremely slim with high, tight waist. Skirts are now more likely to be straight, sloping forms with moderate width, rather than the bell-shaped, pleated skirts that have been so popular in recent years. Skirts with a bell-shaped hem are reserved for afternoon and elegant day dresses. The length of the skirt hem varies between ankle-length afternoon dresses and calf-length street dresses.

Sportswear for the summer is made of single-coloured fabrics such as linen, shantung, pikee, wash silk or Vistra-Côtelé. With fragrant summer dresses of silk or rayon, colourful floral designs, stripes or checks compete for the wearer's favour. Of course, short puffed sleeves or flounces should not be missing here either.

Ladies' Coats In A New Style

In the spring season, new and unusual shapes also appear in coats. American mail-order companies such as Chicago Mail Order Co., National Bellas Hess or Sears present coats with extra-wide, pointed directoire lapels, wide capes, coach collars or grotesque puff sleeves. The most unusual sleeve style is, besides the medieval-looking club sleeve, the lantern sleeve with pointed fans. A novelty is also the lapel which can be worn in two ways: either it can be worn open in the usual way or it can be turned up and buttoned at the shoulder. A very special feature is to drape the scarf or kerchief with a bow. Capes experience a short revival.

In 1933 evening wear, the slender line of the fashion is revealed with its very tight waist, the accentuated full hips and the V-shaped widened shoulder area. Summery, sleeveless evening dresses often feature protruding shoulder flounces or capes, while the evening dresses of the winter season increasingly feature small puff and ruffled sleeves. Also capes - with or without fur trimming -, boleros and jackets underline the width of the shoulder area.

Especially for evening occasions new, elaborate and playful hairstyles are developing in hair fashion. While water waves still enjoy great popularity during the day, many hairdressers suggest soft waves and artistically arranged curls for the evening. The top coat is usually parted at the sides and laid smooth or in gentle waves towards the ears. The topcoat ends in small curls, which - like the spray of the sea - find their crowning conclusion in the neck and above the ears. In some varieties also the longer neck hair is combed up and ends like the top coat in curls. Short curls can fall into the forehead which otherwise always remains free, while the ears are always covered by the hairstyle. Chignons can also be integrated to great effect.

Marlene Dietrich caused a sensation in 1933 by wearing men's suits in public. Already in 1930 she appeared in the film Morocco as an entertainer in a black tuxedo and top hat. And in her latest film Blonde Venus from last year, she also appeared in front of the camera in a white tails decorated with diamonds. You can often see her in the streets of Los Angeles or on her way to the next shoot in Hollywood in a men's suit, tie, shirt and matching coat. In the April issue of the US film magazine Motion Picture she gives an interview in the article "Marlene Dietrich Tells Why She Wears Men's Clothes!

"I am sincere in my preference for men's clothes - I do not wear them to be sensational [...] I think I am much more alluring in these clothes. [...] Women's clothes take too much time - it's exhausting, shopping for them. I only hope other women try them and find the comfort I enjoy in them, free from all the constriction of the conventional women's wear."

"I have a real preference for men's clothes - I don't wear them to attract attention. [...] I think I'm much more seductive in these clothes [...] Women's clothes take too much time - it's much too tedious to buy them. [...] I only hope that other women try men's clothes and also feel the comfort I enjoy in them, free from all the constrictions of the usual women's clothes."

The image of women and their ideal has changed dramatically in recent years. Whereas in the mid-1920s the boyishly shaped and youthfully childlike woman was still presented in all magazines and catalogues, the current type of woman is thoroughly feminine and in the ladylike, middle-aged - almost maternal - age.

So it is hardly surprising that the current image of women is very much welcomed by the National Socialists, who have formed the new government in the German Reich since 30 January, and thus also fits into the world view of the National Socialist movement. The German fashion and clothing industry, which is still largely run and influenced by Jewish families and fashion designers, is still relatively untouched by the political changes in the Reich in 1933.

With the founding of the Berlin Fashion Office and other fashion institutes in the German Reich, an attempt is now being made to influence fashion developments. The aim is to free German fashion from foreign - and thus especially French - influences and models and to crystallize an independent German fashion.

The Gleichschaltung of public administration, associations, organizations and society does not stop of course also before the media and the editorships of the German magazines, like the Elegante Welt, Die Dame or also the fashion show. On the contrary, the German magazine editorial offices are deliberately brought onto the new line as the voice of public opinion.

"One stands here on ground that has remained entirely German, although Romanesque races have repeatedly advanced from the south and west. They were not able to leave behind any noticeable traces! For the greater mobility, the easier, happier attitude to life of the people who have lived in and around the Black Forest since the dawn of German history is true to its roots and not born of a foreign blood mixture. 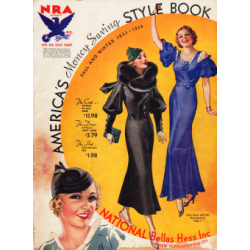 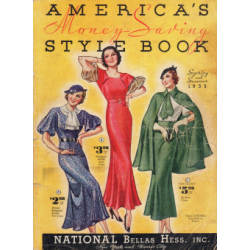 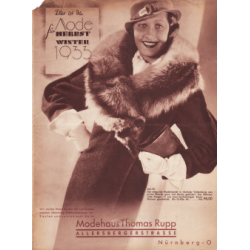 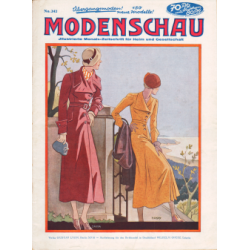 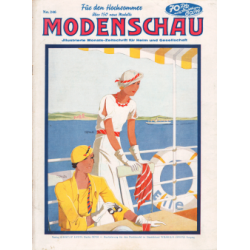 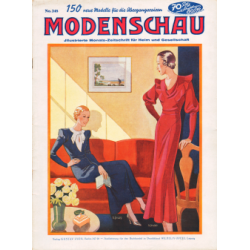 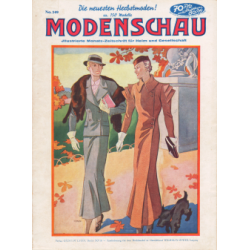 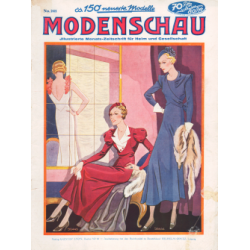 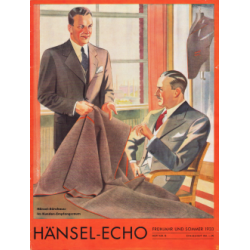 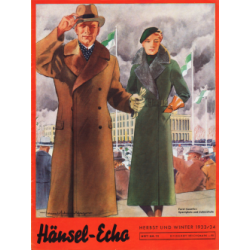