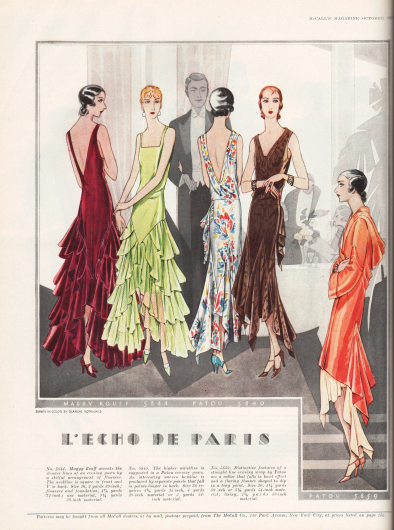 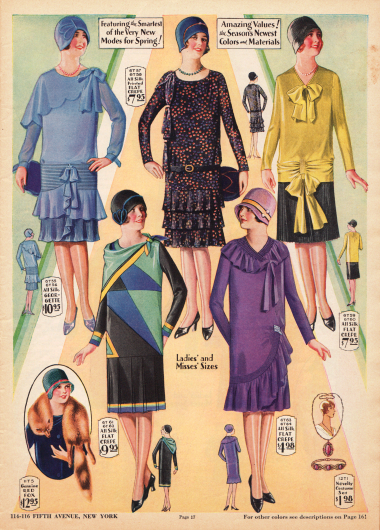 In U.S. mail order catalogs for spring the new silhouette has not arrived yet — Hamilton Garment Co. Spring/Summer 1929, p. 17 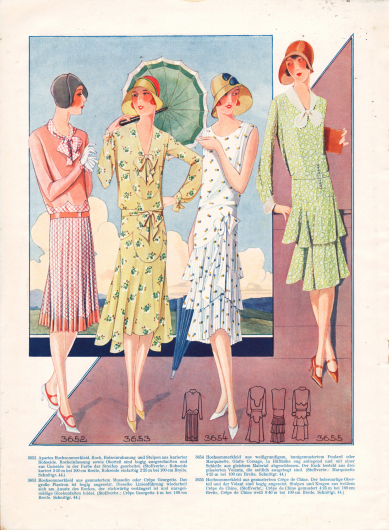 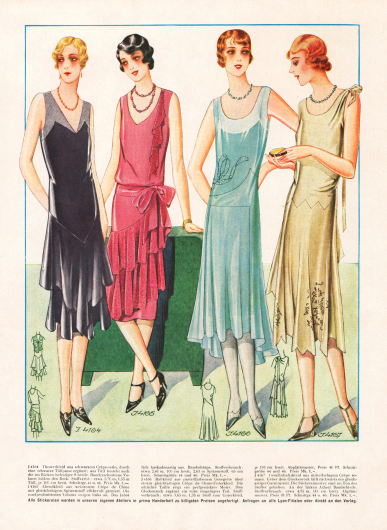 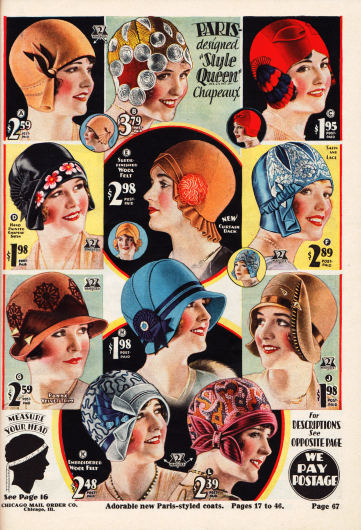 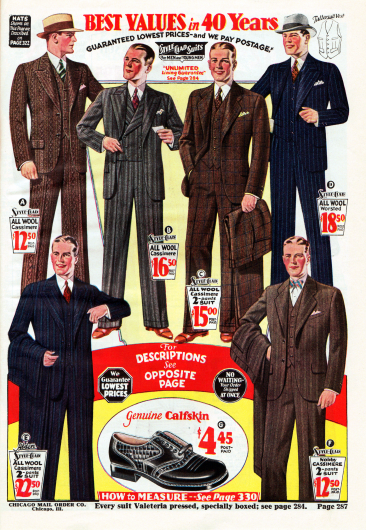 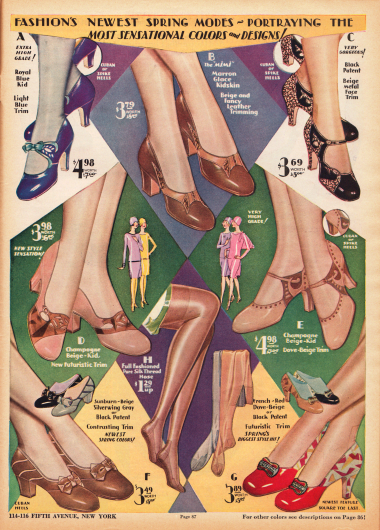 Pumps and buckle shoes in the latest and "most sensational colors and designs" of the spring season — Hamilton Garment Co. Spring/Summer 1929, p. 87 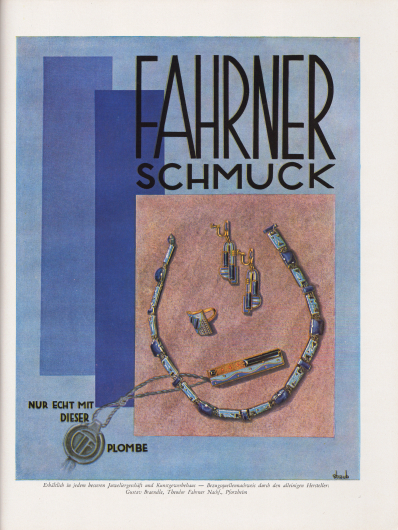 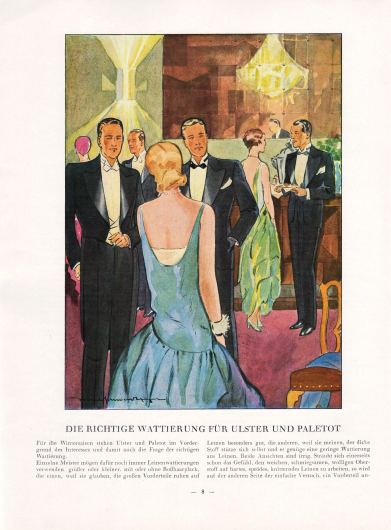 At the end of the twenties, a significant change in fashion took place. The trend of the year 1929 is called femininity. The sporty jumper for the day is increasingly losing its importance. The trend of evening fashion, which was evident last season, is now making its way into daytime fashion. In the spring season, German fashion magazines such as Die Dame or Elegante Welt generally only feature dresses with naturally attached, high waists. The higher waist and the vividly moving skirt create a more elegant, feminine fashion, which emphasizes ladylike forms again.

However, fashion in spring and summer still shows a mixed style, as the second spring fashion magazine Die Dame No. 13 from March 1929 states.1 In addition to the novel, richly decorated, exuberantly feminine dress line, the other side presents exaggeratedly simple dresses, in terms of cut and presentation. These include the simple jersey and tweed dresses, which are used for sports or as simple street clothes.

Particularly characteristic of women's fashion in 1929 are tucks and worked-up trims in diagonal, round or pointed forms, which in their geometric arrangements almost seem like architecturally planned works. Especially the simpler day dresses made of unpatterned fabrics are clearly enhanced by the panel decorations and give a certain variety.

Bell-shaped wide skirts are increasingly displacing the straight simple skirt. Multi-stepped flounces, draperies and sewn-on pieces of fabric overhanging the hem of the skirt create asymmetrical and uneven skirt hems that define the spring and summer fashion of 1929. Airy fluttering, colourful patterned fabrics and small decorations, such as bows in various sizes, give especially the afternoon and formal dresses a playful and refreshingly feminine touch.

Spring and summer fashion is becoming more feminine and is increasingly losing the strict, uniform line. The American magazine Ladies Home Journal also notices the emerging change in the May issue in the article "Variety Returns to the Street Mode":

"For the day of the 'Uniform' for smart women has passed, and individuality brings back feminine charm to the modern fashion."2

For the spring season, Ladies Home Journal is showing some models by Jean Patou, Paul Poiret or Lenief with slightly higher waists, but many American magazines are still reacting with caution to the emerging new fashion.

In late summer, a dramatic change in fashion is heralded: the new models of French haute couture consistently show a higher waist at the natural waist and the skirt hems for daytime fashion are also becoming significantly longer. So now the skirts end again clearly below the knee.

But especially in evening wear the change is most evident. Here again, very high waisted dresses show themselves, the skirt hems become floor-length again. But the new fashion not only brings a new silhouette, but also a completely different way for women to move, as the magazine Die Dame reported in the first October issue of 1929 under the heading "Modewandel" ("Fashion Change"):

"The embodiment of the fashionable line this year is the evening dress. One has often and much spoken of a new femininity, of a new feminine style. Now it is really here, this new feminine style, which is ladylike in the best sense of the word. [...] The slight weariness of the fashion things that women felt after the eternal uniformity of dresses has disappeared. [...] Very elongated and slim women appear in these new dresses. The high waist accentuates the bust, the elaborate lines of all the cut seams make the hips very narrow and childlike. The fabric-rich length of the skirt captivates the mobility of the legs and creates a calm, self-confident posture. Gait becomes stride. Sporty carefreeness is grinded down to a calm, distinguished ladylike behavior."3

The new fashion is polarizing: Many welcome the new silhouette, as the long skirt lengthens the female figure and makes it appear slimmer. The elegant effect associated with this is also judged very positively. Others, however, see the newly won freedom and achieved emancipation of the woman, who found her expression in short skirts and the masculine appearance, as endangered by the apparent recourse of fashion to what was believed to be overcome.

A pioneer of the new silhouette - also known as princess fashion - is the French fashion designer Madeleine Vionnet. She creates the bias cut (diagonal cut) where the fabric is cut diagonally to the thread of the fabric. This cut allows the fabric to flow around the body through the finished dress, allowing the fabric to fall in such a way that it adapts perfectly to the body shape. Madeleine Vionnet's working method is also unusual: she first tries out her designs on small wooden dolls before she tailors them to her mannequins or customers. Although the diagonal cut became increasingly important in the late 1920s, it experienced its greatest popularity in the 1930s.

The spring and summer catalogues of the mail order companies hardly reflect the emerging change. However, in the corset section of the spring catalogue of the Montgomery Ward company it is stated that "Paris is now, more than ever, influencing the new figure lines". Only in the autumn and winter catalogues are tentative changes underway. Sears is showing a limited selection of clothes in the old line in preparation for a change of assortment. National Bellas Hess summarises the new features of the current autumn fashion for its buyers as follows: bell-shaped skirts from the natural waist down and irregular skirt hems for dresses and the princess line and back capes also for coats. In contrast, the Montgomery Ward company's fall/winter catalogue emphasises the importance of "lavish fur trimmings" on coats in the foreword, but also stresses that "Paris [...] emphasises the higher waist".

The cloche hats so popular in recent years are slowly being replaced by felt caps and toques without brim. Existing brims are turned over and fastened with needles or sewn on with the help of decorative ornaments. A characteristic feature of these caps is that they tightly enclose the head.

A particularly characteristic feature of the hat fashion of 1929, similar to the summer fashion, is the love of fashionable asymmetry: the caps are pulled into the face on one side, exposing the forehead on one side but slightly concealing the other half of the face. This asymmetrical effect is further emphasized by additionally attached felt, straw, feather or ribbon wing applications, which further conceal the already slightly concealed half of the face, an ear, the cheek, the chin line or even a piece of the neck.

Towards the end of the 20's, women's shoes become more and more varied and ideal. Some shoes have very large necklines; only the heel and toes are still enclosed by the leather of the shoe. Buckled shoes with a simple or with a T-buckle are not uncommon. Shoes made of two different types of leather give the shoes colourful variety. Strass applications, bows, sewn-on leather ornaments, punched out holes and various types of buckles give free rein to the imagination in shoe fashion.

High, pointed heels are common for the evening, while the toe of the shoe is rounded instead of pointed, unlike at the beginning of the decade. A more conservative shoe type, however, is the Oxford. It is high closed, the heel is rather low and the shoe has laces instead of a buckle. For sports activities Oxfords are preferred with very low heels.

The jacket suit is the most important part of the men's wardrobe. Wide shoulders, neither square nor round padded, a well accentuated waist and a sliding hip section characterize the current fashion silhouette. Wide lapels in straight or rising styles are fashionable; the collars of single and double-breasted suits are medium wide and not too high at the neck. Whether single or double-breasted is left to the personal taste of the wearer. Single-breasted jackets are worked with 2 or 3 buttons, while double-breasted jackets are usually worked with 3 pairs of buttons. The uppermost pair of buttons can also be used to close the jacket.

Unlike in previous years, the jackets are cut slightly longer. The bottle-shaped cut of the sleeves is almost inconspicuous; they taper towards the forearm. The same applies to the trousers. The trousers have retained their width at the top, but become tighter towards the knee. Vests in light colours are always double-breasted.

The preferred suit fabrics are worsted yarns, primarily made of woollen fabrics. The fabrics are smooth, patterned or even roughened, hard twisted as well as loose fabrics, saxons, heavy gabardine and cheviots. Very small pattern stanchions in great abundance are available in either striking or subtle patterns. They range from checks, dots, sprinkles, melanges and figures to striped designs.

For special private or official business visits, as well as for smaller meals or for 5 o'clock tea, the combined suit - similar to the Stresemann - is worn. It consists of a black jacket, black and white striped or silver trousers and a double-breasted vest, which should always be light. The cutaway, which is only worn with striped trousers, is even more formal and festive. The jacket is worn with only one button through. The lap should be cut as narrow as possible and fall pleasingly; patches at waist and lap allow the jacket to fit better. At the back, above the split lap fold, there are two decorative buttons at waist height.

Tuxedo and Tailcoat for Evening Parties

A tuxedo and tailcoat are indispensable for the festive evening. The tuxedo is usually single-breasted and is closed on one button. Similar to the jackets for the day, the lapels are cut very broadly, but are often trimmed with shiny silk, which is particularly fashionable. The tailcoat, which is without doubt still the most festive piece of men's clothing, is worked with three buttons. The front parts stand about 20 cm apart. The lapels are so narrow and lie so far back that the gentleman can easily put his hands in his pockets. As headgear for the tailcoat only a cylinder is possible. The vests for tuxedo and tailcoat are mostly made of linen batiste or washing linen. 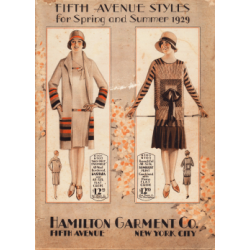 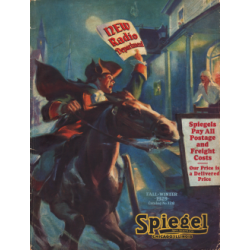 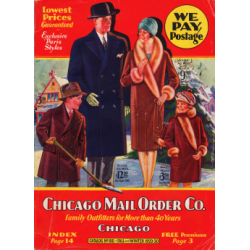 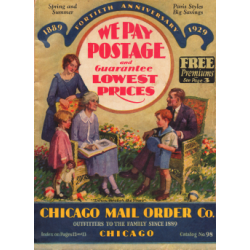 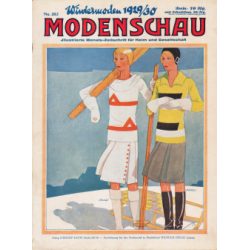 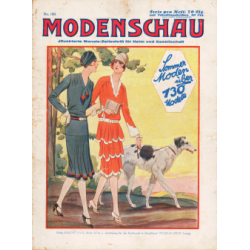 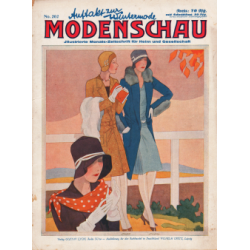 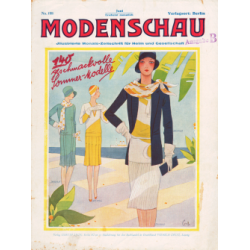 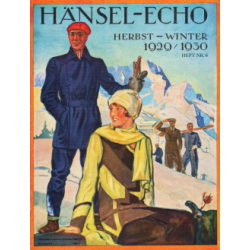 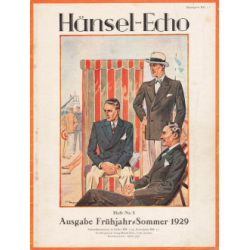 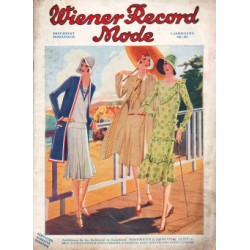 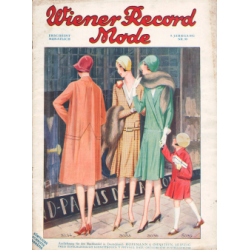 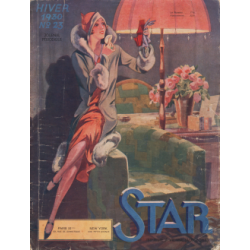