Women's Work On The Home Front 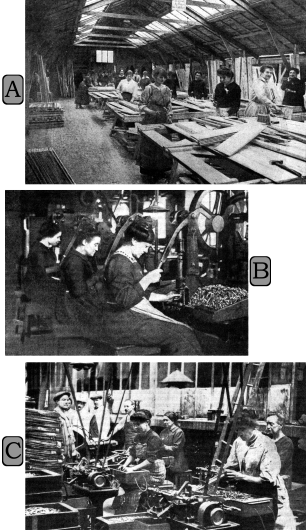 The outbreak of the First World War in August 1914 was the beginning of the end of the hobble skirt and the exotically extravagant oriental wave poirets. When it became obvious that the war could not be won within a few weeks or months and millions of men in Europe were called up for military service to fight in the trenches of Flanders, the vacant positions in the war-important armament factories were inevitably filled successively with women. While women first took over the work in administration, factories and hospitals for the wounded, with the course of the war more and more technically and physically demanding jobs, which were previously reserved exclusively for men, were added in heavy industry, agriculture and also in mining.{*}

The hustle and bustle of the busy wartime and the heavy physical work of the women required a practical and at the same time comfortable style of dress that hardly allowed any extravagance. Employed women who took on office work in the administration wore long skirts made of dark wool fabrics and blouses made of silk or cotton yarns with matching hip-length jackets and high waist belts. These tailor-made costumes in Norfolk style were already part of the basic wardrobe equipment for working women before the war. Uniforms became commonplace for women who did their service as policewomen, conductors, nurses, army assistants or even ambulance and truck drivers. In heavy industry, women even wore trousers and dispensed with corsets in order to be able to do their work unhindered. When working with machines, wearing open hair was a serious safety risk, which was reduced by wearing hoods and caps. The hair was usually tied together and worn as a topknot at the neck. By wearing short hairstyles, the first women became pioneers of a fashion revolution and thus also symbolic harbingers of a social change that continued vehemently after the war.

Between Crinoline Fashion And Lack Of Fabric 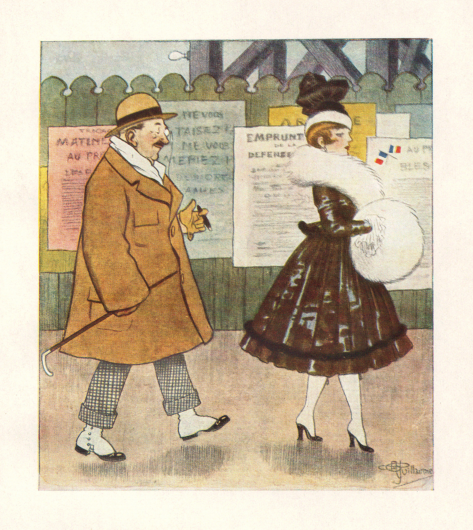 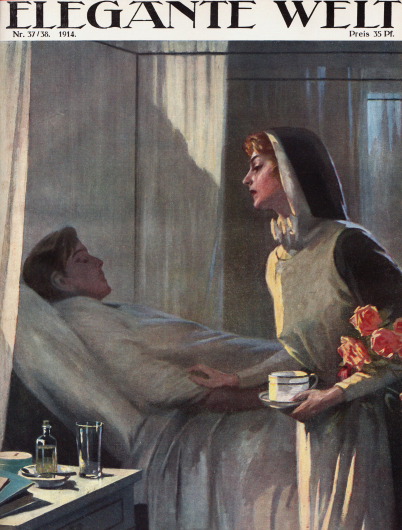 Front page of the double issue of the Germany magazine Elegante Welt with a motif of wounded care — Elegante Welt No. 37/38, September 23, 1914. Illustration: unknown. 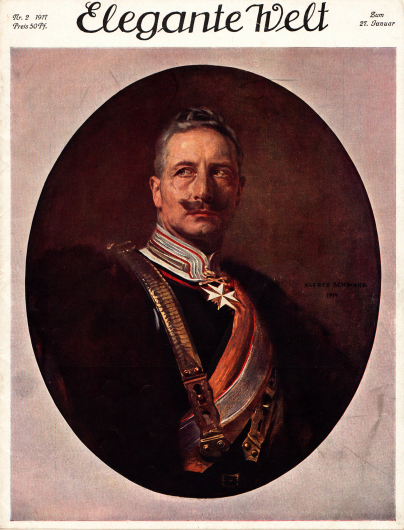 Even general fashion was forced to adapt to the new war situation. In the winter of 1914/15, the small crinolines of the spring season 1914 developed into ever more flared skirts, which reached their greatest width in 1916, but were hardly more than calf-length. The war crinoline allowed its wearer larger steps and much more freedom of movement, but required a much larger amount of fabric. To match the other skirts, the coats were also cut wider, so that a generous drape also gave the coats a new line. Oversized pockets, in which many small items could be conveniently stored, and large buttons completed this new fashion mood.

Increasing scarcity of fabrics, rising prices and the rationing of fabrics, which were increasingly only available on cover note, caused the end of the lavish war crinoline from the spring of 1917 onwards. Dresses in boules, balloon dresses or the so-called barrel skirt with puffy fabric around the hips but narrow, narrow hems took the place of the crinoline. In order to save even more fabric, the make-up and dress cuts were simplified, unnecessary finery and decoration disappeared. This new simplicity, which was primarily the result of necessity, became the new model for fashion during the war and far beyond. The profiteer and pioneer of this new simplicity was Coco Chanel, who had started her career as a milliner (hat maker) and opened her own fashion salons and boutiques in chic French spa and seaside resorts such as Deauville and Biarritz between 1913 and 1915.{*}

The British blockade of the high seas, which had been closed since 1914, cut off the Central Powers from international trade networks and overseas markets so successfully that the course of the war led to increasingly serious bottlenecks in the supply of the population with basic foodstuffs and other goods for daily use. The Hindenburg program of the 3rd Supreme Army Command (OHL) of August 1916 made the German Reich "de facto a military dictatorship" {*}, which tried to mobilize all remaining economic reserves, in order to decide the first total war of modernity for itself after all.

As a result the armaments industry got the absolute priority over the civil consumer goods production.{*} The foundation of the "Reichsbekleidungsstelle" in March 1916 was intended to help manage the stock of cloth and improve the distribution of textile goods to the population. At the same time, ration coupons were introduced, which regulated and ensured the allocation of clothing and shoes, but above all rationed them. The already existing "Clothing Procurement Office", which was subordinate to the War Office, ensured the supply of uniforms and other textiles to the army. Municipal clothing recycling centres and collection points for used old textiles from private households were established all over the Reich.{*}

Social After-effects Of The World War 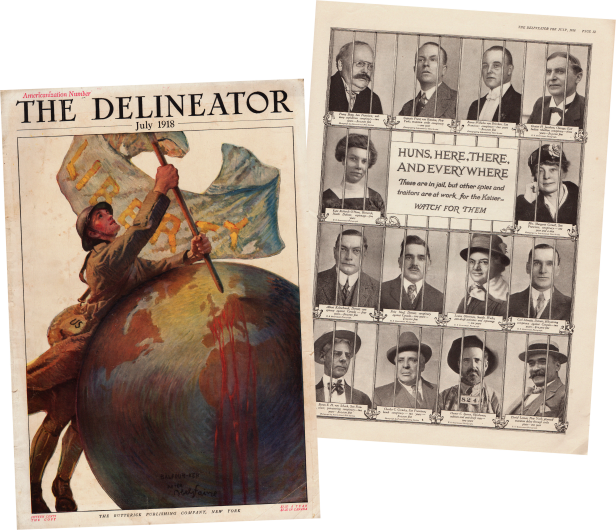 Cover of the U.S. fashion magazine The Delineator with a Doughboy thrusting a flag with the inscription "Liberty" into the bloody soil of Europe. A propaganda ad in the issue shows convicted traitors and spies and warns of more "Huns" — The Delineator, July 1918. Illustration: William Balfour Ker (1877–1918)

Although all activities of women's rights activists and their organisations came to a complete standstill with the outbreak of the war and all efforts were now concentrated entirely on the national cause, it was precisely the First World War that led to the first successes of women in their quest for more rights, social recognition and emancipation. Shortly after World War I, women in Great Britain were granted limited (1918), the German Reich (1919) and the USA (1920) full voting rights, for which suffragettes had fought for decades with little success. During the war, women - like men - had made many sacrifices and proved that they were an equal part of society and capable of the same achievements as men.

From today's perspective, the First World War can be seen primarily as a social and political caesura that not only called into question the old order, the traditional understanding of roles and the zeitgeist of the late 19th century, but also shook it permanently. After the war many things were not as they had been before. On the one hand, it left behind a traumatized generation of young men and, on the other hand, a generation of women who had enjoyed relative autonomy and independence for the first time and were thus able to develop a new self-confidence. The attitude towards life in the immediate post-war period was characterised by an addiction to pleasure, a tremendous zest for life and the feeling of having escaped once again. Dance events, theatres, nightclubs, cabarets and cinemas were overcrowded, cultural life flourished again and the new dawning decade promised a new era, which in retrospect would go down in history as the Golden Twenties.