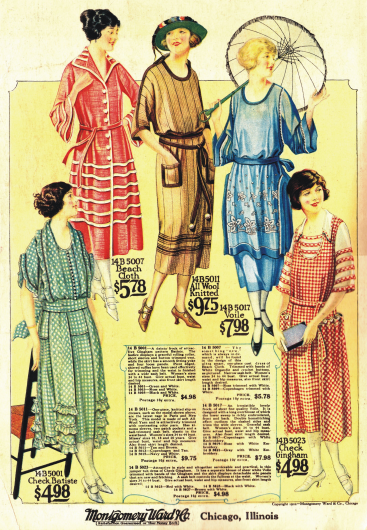 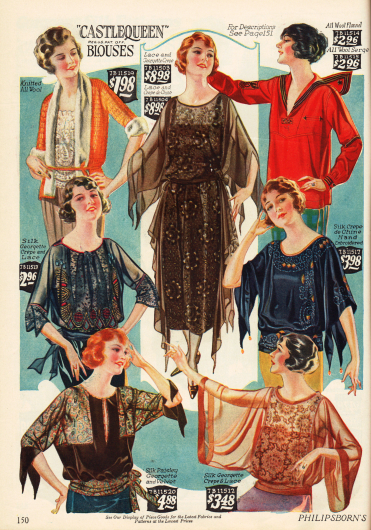 Sweaters (above) and women's blouses with wide kimono sleeves and slit sleeves with embroidery and lace — Philipsborns Fall/Winter 1922, p. 150 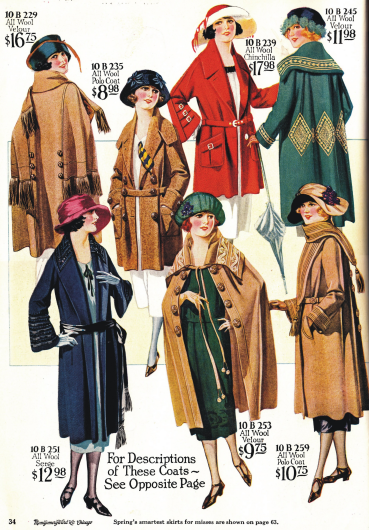 Spring coats and jackets, some of which can also be worn as capes — Montgomery Ward & Co. Spring/Summer 1922, p. 34

In 1922 the skirt hems are as short as never before. Until the summer of that year, the skirts become even shorter and now end on the calf, whereby the skirt hems are not categorically the same length for all women, but are different for the age of the wearer, for example.

For girls the skirts end at the knee. Even for young ladies up to 20, the skirts are almost knee-short. For the adult woman the skirts are about calf length. For heavier-built women, women of advanced age or with a conservative taste, the skirts are longer and cover the calves significantly.

The waist disappears from the silhouette of current fashion, which prefers the shapeless line. The waistline moves further and further down and is now below the natural waist. The belt line is loosely draped on dresses by means of narrow, darkly piercing leather belts or ribbons made of the same fabric and colour of the dress.

The wide and loose cut results in a bag-like silhouette of the dresses. Wearing petticoats underneath the actual skirt further emphasizes the formless width of this silhouette.

Special attention is paid to the sleeves of the dresses, which this year are cut particularly airy and are getting wider. Especially the so-called bat sleeves with downright exaggerated lower sleeve width are very popular on dresses and blouses. Coats and costume jackets are often enlivened with overlapping and slit wing sleeves. For transitional fashion, loose capes instead of coats are a popular alternative.

In the autumn of 1922 fashion changed drastically. While the hem of the skirt is again extended to the ankles, the silhouette and thus the figure of the woman, "who seems to be back in the case," comments Die Dame in the first issue, which is published in mid-October. It continues:

"The cover nestles up tighter again and gives the figure something elongated, snake-like, which of course only gains the right expression with a slender, evenly grown body".

While the simpler day dresses are extremely unadorned, almost like smocks, the others of the new formal dresses show a variety of gathers and draperies, which are mainly found on the front of the skirt and which certainly accentuate the female body shapes.

In general, the current silhouette does not necessarily call for tight corsets, but they are still worn and only a few completely do without them. For the first time brassieres are coming on the market which are usually combined with a girdle with elastic inserts and should provide more freedom of movement. Matching corsets and girdles are mainly made of coutil, but also of jacquard, brocade and other robust cotton fabrics, which are offered for every figure. Special attention is paid to a flat stomach and a flat chest. Bandages and so-called bust confiners are designed to flatten and shape the chest to match the new androgynous ideal.

The hats are characterized by a deep crown, which serves to accommodate bushy hairstyles, and are often decorated with protruding feather arrangements or flower ornaments. The brims of the hat are rather short and are often placed against the crown or bent upwards. Still popular as in previous years are the fancy two- or three-headed hats, toques, berets, turbans or similarly striking headdresses, which are often richly decorated with large ribbons tied into bows. The hats are always pulled deep into the face up to the eyebrows. 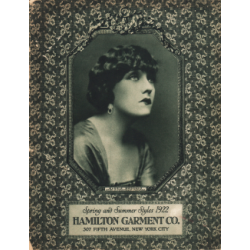 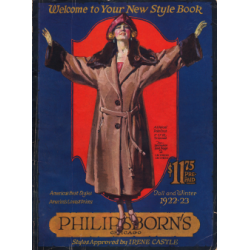 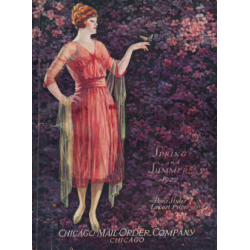 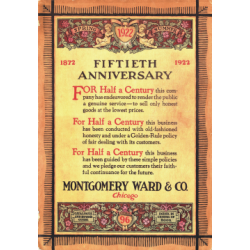