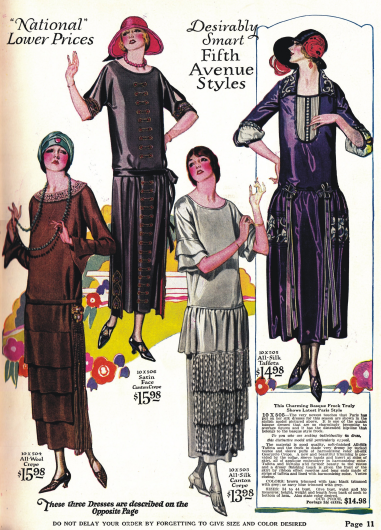 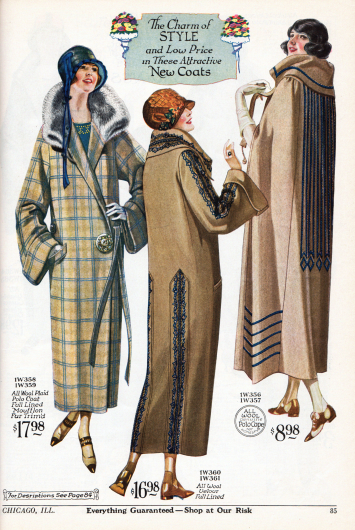 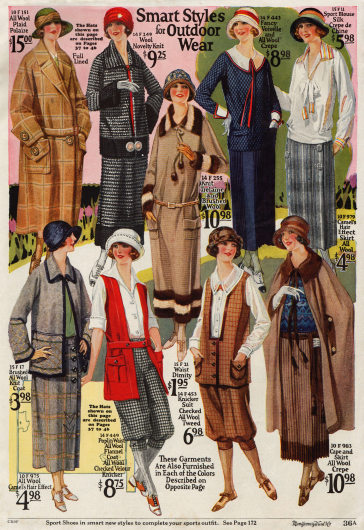 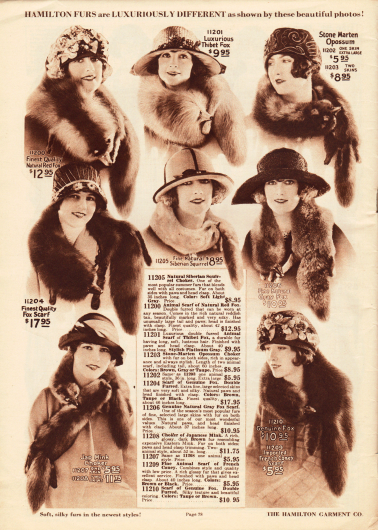 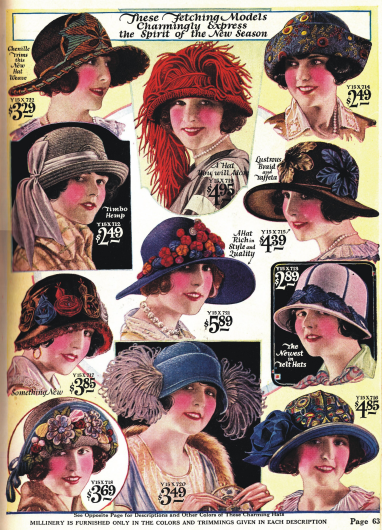 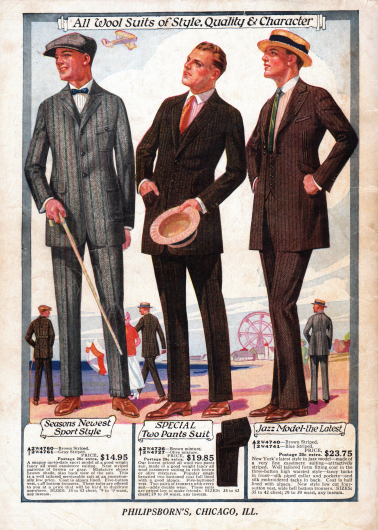 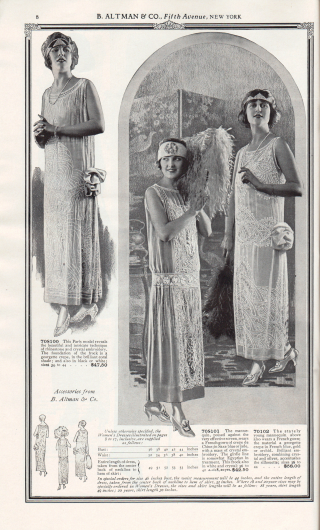 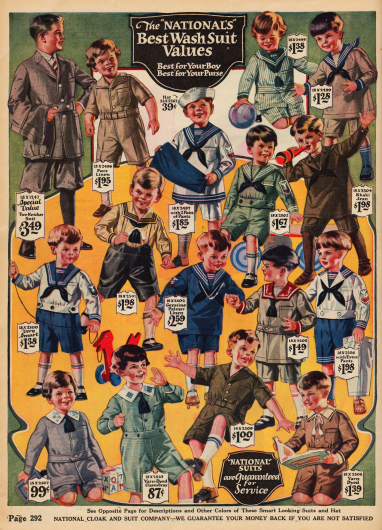 In women's fashion a straight and slim line crystallizes in 1924. This year, the narrow, tight skirt completely replaces the wide, pleated skirt of last year. The close-fitting, almost tube-like cut dress, the so-called sheath dress, becomes a favourite of spring fashion. This straight silhouette is interrupted in some dresses only by a wide flounce, e.g. made of pleated fabric, which starts at the knee at the earliest and expands the hem bell-shaped or jumps out when walking. Simplicity and simple dress cuts give this year's fashion an extremely sporty and youthful touch.

Last year's ankle-length skirt is also outdated and this spring it is already several centimetres shorter. Already at the end of the year the hem of the skirt reaches the calf again. The waistline remains very low at hip level, although many dresses are not worn with a belt at all, as this has become somewhat out of fashion.

The lady's street suit in spring, which should appear as casual and sporty as possible, consists of a short jacket, a skirt and a tunic. The tunic, a very long blouse, which is usually worn with a belt and actually comes from sports fashion, replaces the blouse this year. The blouse is worn over the skirt and sometimes it is so long that the blouse looks like a dress and the skirt often only sticks out a few centimetres below it. Often, under a long blouse, only an undershirt with a sewn-on skirt is worn, which consists of only one strip of fabric. Rips, flannel, alpaca and tricot fabric are perfect for this long blouse, which of course should be colour-coordinated with the rest of the costume. If the jacket and skirt are one colour, the tunic can be chosen in bright colours or patterns. If the jacket and skirt are made of striped, plaid or Scottish fabric, a light-coloured, plain tunic should be chosen.

The dress presents itself in 1924 in a simple cut. The lines are very similar to those of a shirt and fall straight down from the shoulder. The shirt dresses, which only appear simple at first glance, get their special charm from fine but elaborate details, which should be as discreet as possible. Tedious handicrafts, quilting, hand and machine embroidery, incorporated apron parts, borders and appliqués made of panels give each dress its own character. The embroideries as well as the patterns of the dress fabrics run mainly crosswise.

Especially in spring and summer many dresses show short sleeves. Afternoon dresses for warm days, on the other hand, are sleeveless throughout. Preferred colours this year are brown in all shades, light grey tones or beige. These colours are often combined with this year's fashion colour red, which appears in all shades. Especially geranium, sealing wax and tomato red are the most popular and are used to great effect - mainly for hats, scarves or tunics.

This year, the scarf, which is already extremely popular at the beginning of the year and has become an important accessory in fashion, is taking on special significance. In its first December issue, Die Dame magazine notes that "Every other dress today has a scarf, tie or bow tie. Big bows are tied from a very long, or even two-coloured scarf, which can be made of chiffon, for example, with the ends falling down to the knee. Ties are passed through the fabric of the dress and are sometimes so grotesquely long that they reach down to the hem of the dress. A similar effect is achieved by monkeys and jabots, which are reminiscent of the Directoire. Some dresses do not have a collar at all, but instead have a cut scarf. In summer, the scarf is increasingly replaced by a colourful shawl.

Small hats with extremely narrow, short brims remain very popular with the ladies. A pair of these small hats in cylindrical form show short, but also high head shapes, whereas hats in bell shape usually fit extremely tight and close to the head. Pedal and picot straw, tulle, muck, felt and velvet are the most commonly used materials for hats. Ribbons in all widths and colours, blossoms, sloops, bows, rosettes, hat pins and even frills and buttons made of metal or mother-of-pearl are used to cover the otherwise simple hats. Japanese influence can be seen in the design or in hat fittings in red lacquer. In the summer months, even the very large hat with its extra-wide brim conquers its place in fashion. Especially these summer hats present delicate heron feathers, ribbons and flowers, which also extend beyond the wide brim.

The two and three-piece costume, also known as ensemble or complete, gained increasing importance in the autumn fashion of 1924. The two-piece suit consisting of dress and coat is undoubtedly more elegant than the three-piece suit consisting of tunic, skirt and coat, which looks much more sporty and thus casual. Characteristic of the autumnal line is the retention of the straight, tube-like line of dress and coat, whereby even first dresses with bell-shaped skirts point in a new direction of fashion. The fashion fabric of autumn is ribbed silk (ottoman) next to artificial silk and velvet. Slight echoes of the Directoire and Empire epochs and Chinese influences, which are expressed in embroidery as well as small Chinese curls or open pagoda sleeves, are noticeable.

The fondness for early 19th century fashion is particularly noticeable in jabots, high-necked collars and the double-breasted Directoire coat, whose lapels and collars are particularly sweepingly shaped and can be trimmed with fur. Coats with coachman's pelerine have similar echoes. In contrast, the male paletot made of English fabric, which is preferably worn in the mornings, has a simple appearance with a light waist, flap pockets and a black velvet collar. The Paletot goes best with men's shirt and coat dresses with tie and leather belt. Rich fur trimmings of leopard, rabbit, shorn lamb, chinchilla, gazelle, monkey or goat, on the other hand, can be seen on the other autumn coats. Persian, broadtail, ermine and mink are the predominant species for fur coats.

Evening dresses cannot be elaborate and luxurious enough. Expensive and noble fabrics such as coloured brocades, silk, lace fabrics, chiffon, gold and silver lamé as well as sparkling rhinestone or pearl ornaments or silk embroidery enrich the dresses, which are so simple on average and resemble a gown or bodice in their shape. A long, looped tulle scarf is not dispensed with here either. The evening dresses are almost without exception sleeveless. As a suitable headdress for the evening party, tiaras are the most sought-after ones, which are decorated with rhinestones, sparkling glass stones and, more rarely, with more precious stones. Bandeaux in the Empire style or with ribbons falling down to the sides, headdress made of galalith, turbans made of gold fabric and nets made of pearls and coloured stones with chains hanging down decorate the heads of the elegant ladies. But also headbands with embroideries or fabric flowers are very popular.

A special change to the shapeless, straight dress form is offered to the lady who prefers a feminine silhouette by the style dress. This is characterized by a wide flared skirt from hip to hem, while the top of the dress is kept in the straight line of the current fashion. This stylish dress is especially popular for evening occasions. But also as an afternoon dress the dress finds followers and is worn in the summer months preferably with a wide-brimmed hat.

Children's fashion is very similar to the fashion of the grown-ups. Especially the dresses and gowns for little girls show, like their big idols, the low waistlines and the shapeless and beltless line. Button plackets, turn-ups and bows are copied from the ladies' dresses. Chequered fabrics for dresses and coats are just as common as crocheted and knitted dresses and suits for all ages.

For boys, washable play suits made of khaki, denim or batiste are offered in US mail order catalogues. Many of these playsuits are based on military or police uniforms and baseball or Indian playsuits are also popular. Especially popular in the United States, as well as in Europe and the German Reich, are navy and sailor suits for little boys. Boys usually get their first long-legged trousers at about 10 years of age when a suit is bought for a special occasion. Up to this age, but also beyond, boys wear suits with short trousers that are worn with knee socks.

At the beginning of the twenties, the fashion of the American mail order companies is still very up to date and picks up current trends promptly. The catalogues offer a huge selection of different clothes in all variations.

In the mid-twenties, however, US mail order companies increasingly began to compete with shops and department stores in small American cities. The main target group of the mail order companies, the farmers and rural population in the remote regions of the USA, can - favoured by mass production and increasing prosperity - afford increasingly affordable cars. As a reaction to changing consumer behaviour, large mail order companies such as Sears and Montgomery Ward established their own retail chains in small and large cities from 1925 onwards, reducing the range of products in their catalogues in order to be able to compete on price. The topicality of the fashion offered falls behind that of haute couture. Thus, current trends are only reflected in the catalogues after they have become generally accepted, with a time lag. 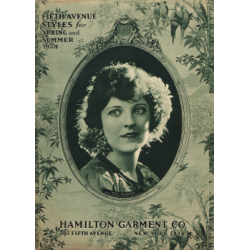 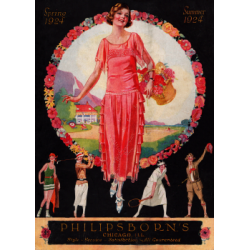 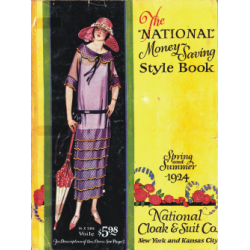 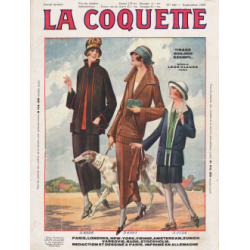