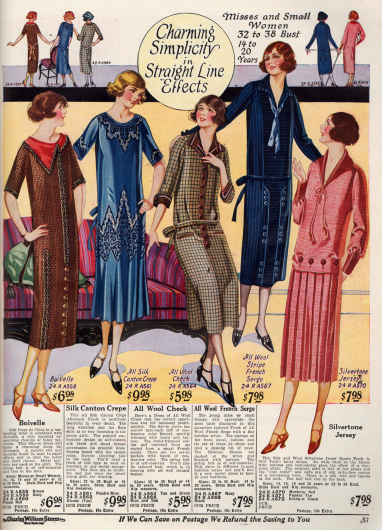 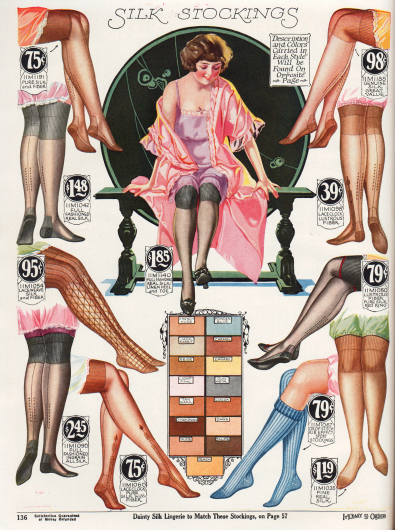 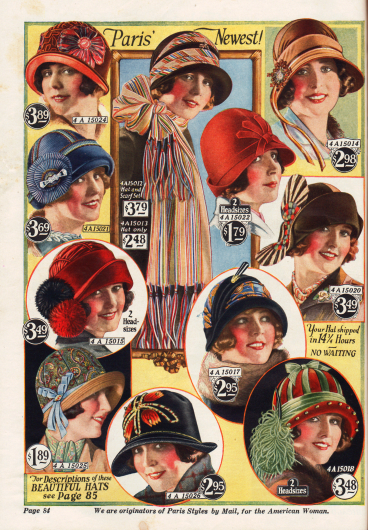 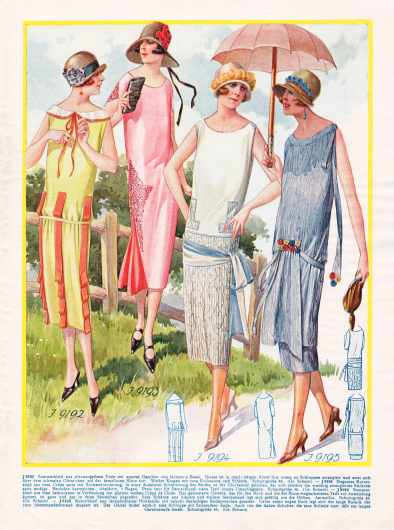 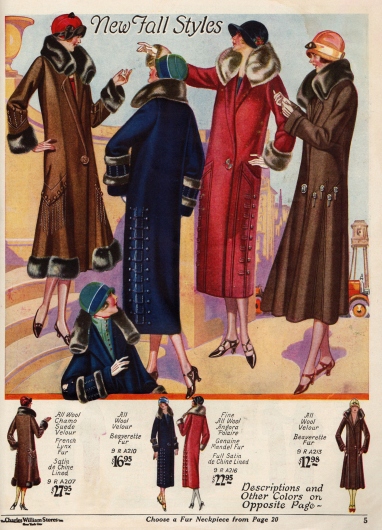 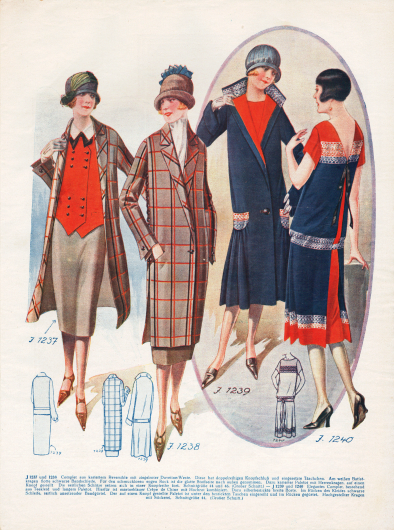 Ensemble with brick red vest and tea ensemble with paletot of blue and red crepe de chine — Modenschau no. 153, September 1925 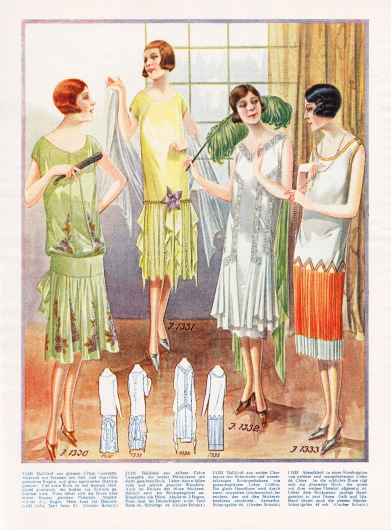 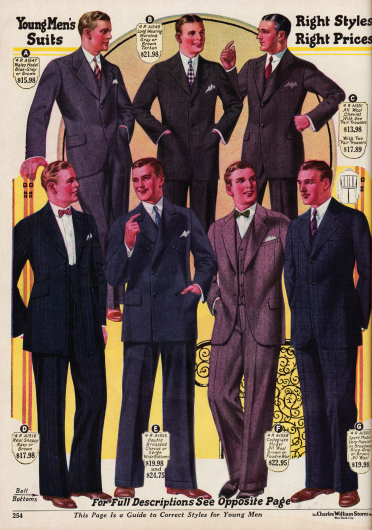 The ladies' fashion of 1925 is very masculine, and the lady is only too happy to help herself to the gentleman's wardrobe. Ties, melons, suit shirts, men's pallets or trench coats are popular items of clothing that are often used to provoke and attract attention. The particularly courageous ladies even wear trouser suits or for the evening also tuxedo costumes. The straight, shapeless silhouette and the short cut hair, which is coiffed to a bubble head or Eton cut, leaves no doubt about the preference for androgynous lines. The fashion à la Garçonne (Engl. "flapper"), also known simply as the Garçonne style, reached the height of popularity in 1925.

The preference for the men's frame is particularly clear in the tailor's costume, which, when worn mostly in the morning in the city, is often referred to as a running costume. Cuffs, double-row or single-row button plackets with leather buttons as well as the cut and line of the costume jacket are strongly reminiscent of its male counterpart, the jacket.

The intended provocation does not miss its effect. Under the title "But enough is enough" a commentary of indignation appears in the Berliner Illustrierte Zeitung of 29 March:

"What was at first like a capricious game of women's fashion gradually becomes an embarrassing aberration. At first it seemed like a graceful joke that delicate, dainty women cut off their long hair and appeared with pageboy haircuts [...], that they shortened their skirts and cut their slender legs to the waist.slender legs up to the stumpiest rounding of the calves [...] more and more, fashion was determined to masculinize the female appearance [...] It is high time that the healthy male taste turned against such bad fashions.“

In the U.S.A., too, the supposed masculinization of women's fashion is stirring the spirits. However, masculine fashion and the blurring of role models also become the stuff of satirical songs here. The title Masculine Women, Feminine Men is interpreted by many jazz bands and orchestras of the decade and becomes very popular in the following years.

It was only the Exposition internationale des Arts Décoratifs et industriels modernes, which took place in Paris between April and October 1925, that gave the arts and crafts and industrial design its own name after the First World War. Although the Art Deco style is expressed primarily in architecture, interior decoration and art, fashion is not completely unaffected by the new art movement. Thus in the following years cubist and abstract fabric designs became more and more popular and accepted by the fashion industry and couturiers.

Wide But Short Skirt In Spring

This year, Parisian haute couture presents shorter skirts than ever before. Starting with the calf-length skirt at the beginning of the year, the hem of the skirt climbs up to just above the calf until spring - and ends between calf and knee at the end of the year. The airy spring fashion is accompanied by short, sometimes only hinted sleeves. Fabrics such as light silks, kashas, silk rips, alpaca and crêpe satin set the tone.

In contrast to last year's slender, tube-like dress line, this spring a lot more bell-shaped skirt styles are taking hold. Deep or hidden pleats, incorporated godets, pleated parts, light pleated fabrics and pleated inserts extend the skirt and give the wearer more freedom of movement. However, in many dresses the skirt widens at thigh or even knee level, so that the straight line is only interrupted by the wide hem. Flounces are also effectively used to extend the skirt.

While the skirt hem of the dresses increases in width, the shape of the coats remains narrow. Only in the course of the year does the cloakroom hem take over the width of the dresses. Bell-shaped side panels and inserts give the autumn coats a completely new line, which is further emphasized by the use of narrow fur trimming around the hem. Even fur coats for the winter and fur-trimmed evening coats are part of the new width.

Coat dresses with button placket and one-piece dresses, which continue to propagate the very straight line, are still modern. Many simple day dresses only hint at the waist and also do without a belt. Often it is the skirt base that separates the top of the dress from the skirt. Sometimes the waistline is only hinted at by pockets, buttons or embroidery and lies on the hip.

On the other hand, there are also first tendencies to increase the waistline again, e.g. by new lines. Some fashion houses like Paquin, Vionnet, Martial & Armand as well as Patou show some spring models with slightly higher waist. Some of these dresses show the new prince form, which is characterized by a shortened (tighter cut) waist in combination with the wider skirt. This new, slightly curved line gives the dress a feminine contour again. As an alternative to the otherwise so masculine and sporty dress line, this fashion has enjoyed a certain success, which will increase in the coming years.

This spring, the two or three-piece ensemble, consisting of either a blouse, skirt and a matching coat or a well-matched dress and coat, takes on a special significance and pushes the meaning of the costume into the background. Several dresses for different times of day and occasions can be combined to a well chosen coat. Such a coat can be worn with a simple running dress in the morning, while in the afternoon an elegant formal dress for 5 o'clock tea or even a dance dress can be considered. A somewhat more casual variation is the Sportcomplet, which is conveniently worn with a dress and sweater.

It is important for the Complet that the coat and dress match in some detail. This can be achieved, for example, by using one colour of the coat on all dresses and optional accessories. However, "too much matching [...] is inelegant. Just any boldly striking detail can give the suit a chic touch," advises the magazine Die Dame in its first April issue. Effective fabric combinations for coat and dress are wool and silk, kasha and crepe silk, rep and failleseilk, ottoman and light crepe, whereby the coat lining is always made of the dress fabric. The Complet with its almost inexhaustible combination possibilities takes into account an era characterized by fast pace and the desire for uncomplicated comfort.

Among last year's dances, the wild Charleston from the USA is still the undisputed leader. For the Dance Tea one likes to wear a light formal dress or dance dress, which is of course made of light and airy fabrics like georgette, silk or chiffon and can be in the fashionable colour purple.

The evening fashion presents itself splendidly and in bright colours. The dance dresses, ball gowns and large evening dresses show flower tufts on the shoulder and all kinds of shimmering embroidery. Small bags made of gold and silver leather, feather fans with sparkling stones, tiaras as well as jewellery and shoes made of brocade or lamé with rhinestone trimmings, which can even be found on the heel, compete with each other in the sparkle.

Traditionally, men's fashion is subject to much slower changes than women's fashion. Since the First World War, the general fashion for men has hardly changed. Only this year, a new line in men's fashion is emerging, which replaces the tight and very tight cut of jacket and suit trousers.

Similar to women's fashion, in 1925 the very high, tight waist of jackets in men's fashion disappeared in favour of a lower and more discreet waist at the height of the natural waist. Wide shoulders are emphasized and the transition to the sleeve is soft and rounded. Overall the cut is more generous. The lapel becomes wider and is now noticeably deeper, making it longer. However, it is entirely up to the gentleman's taste whether the jacket should rather be with lapels worked up or down. Likewise, the question of the single or double-breasted jacket is up to the preference of the wearer.

Matching the jacket, the suit trousers, which are worn with creases and short lapels, also take on a completely new shape. The trouser legs, previously only ankle-length, are now cut longer so that the ankles are completely covered. But especially the width of the trouser legs is new, which can reach a circumference of up to 20 inches (about 50 cm) around the knee. These wide trousers were made popular by students from Oxford, as the wearing of knickerbockers has been banned at British universities and students have started to wear wide trousers over their knickerbockers. Hence the origin of the name Oxford Bags by which these trousers are also known in America.

The Elegant Gentleman Is Wearing Stresemann

For special formal occasions in the morning and afternoon, the cutaway, or short cut, is obligatory for the well-dressed gentleman. The political protocol of the time also provides for the Cut for Reichstag sessions or acts of state, but it is too festive and inappropriate for normal government or office work. In order to facilitate the constant change of clothes between the Reichstag and the office, the German Foreign Minister Gustav Stresemann simply wears a black, single-breasted jacket instead of the cut to go with the black-grey striped trousers and black vest. To this suit, which is henceforth known as Stresemann, a white shirt with a stand-up collar or turn-down collar, a black tie or plastron (wide silk tie) and black shoes are generally worn. 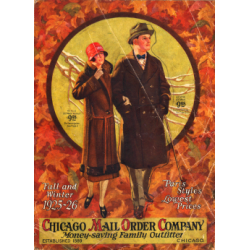 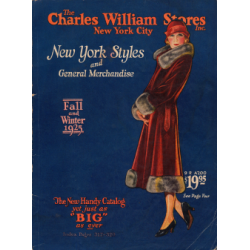 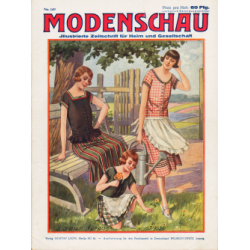 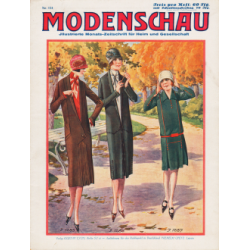 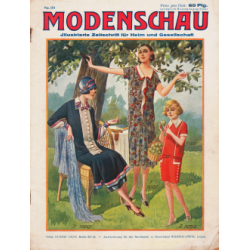