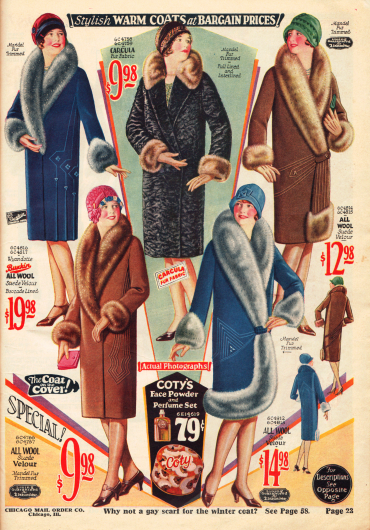 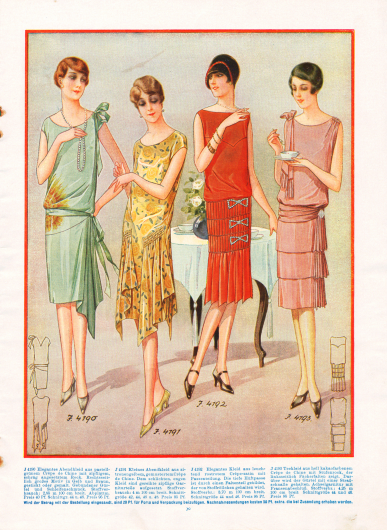 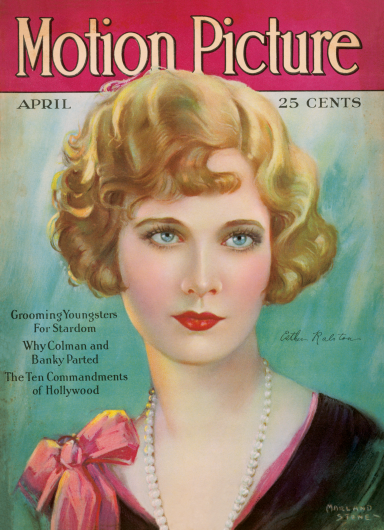 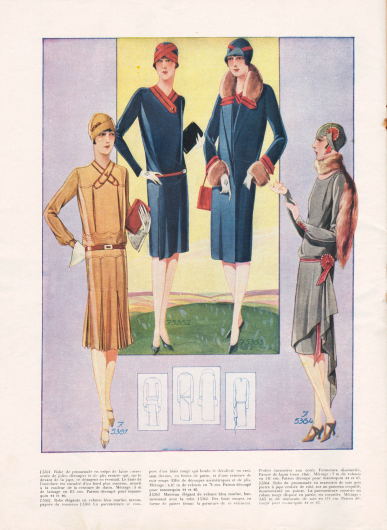 Promenade dresses (left and right) in crepe de laine and morocain, and an elegant dress and coat in velour — La Coquette issue no. 191, December 1928. 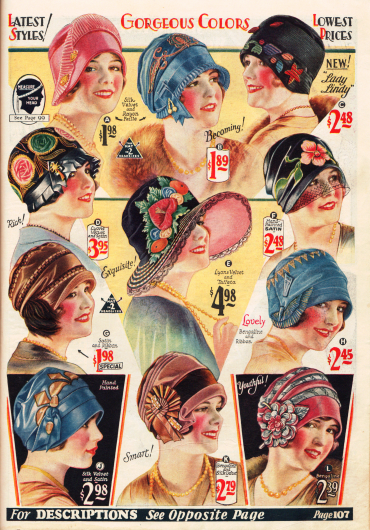 The silhouette, which has been in force since 1925, changes relatively little in 1928 daytime fashion. The sporty, simple jumper is still very popular with the ladies.

However, there are signs of significant changes in the afternoon and formal dresses. Female curves are carefully reappearing. Thus the waist is not excessively emphasized, but again clearly visible in its natural place, by cutting the dress slightly tighter at the waist. Some models are also accentuated by a high waist belt, a gathering of the fabric at the waist or generally by the use of lace in a feminine way. However, the waist is not yet generally placed at the natural waist, as the models from Paris suggest different waist heights.

Especially in evening wear, the new shapes and lines are experimented with. In the autumn of 1928, for example, evening dresses were launched with short hems at the front and floor-length hems at the back. Last season's irregular, pointed extensions continued to lengthen, falling in a sweeping fashion towards the floor, but not extending the entire hem; these extensions led to the term peacock tail fashion. This development is a logical continuation of the trends of the last season. On the other hand, the back neckline is cut generously, so that the back is exposed in many models.

Irregularly lengthened skirt hems are becoming increasingly popular and are achieved, for example, by sashes, flounces, fabric inserts or additional sewn-on fabric parts that extend beyond the actual hem.

The lightness and vibrancy of the fluttering tails, the partly extended skirts and the incorporated pleats with natural waist are characteristic for the new line, which is also proclaimed as princess fashion on all sides. The new silhouette conveys femininity and is perceived as very flattering for the female and slim figure.

With the extraordinary importance that the cinema now enjoys, and the countless millions of cinema-goers who flock to the cinemas every year, the cinema is also becoming interesting for the screening of advertising films. Before the actual main films, newsreels, short previews and commercials are shown - including short films with news from the world of fashion, which are also intended to inspire the viewer to choose her own wardrobe.

The latest fashions from renowned Hollywood stars will be presented, which are intended to lend special charm to the models presented. With the further development of film technology and the improvement of the Technicolor process, the first fashion short films in the USA - in colour - are created in the late twenties.

The glamorous appearance in the theatre or at a festive reception is underlined by a cape made of lamé, silk or velvet fabrics, which is often worn with fur trimming on the collar. The cloak is held with one hand and is cut long at the knees, so that the extended hem of the evening gown protrudes underneath. This effect also occurs when wearing a normal coat, as the coats also continue to reach only to the knee.

However, the fashion of US mail order companies remains unaffected by the emerging change in fashion. In the fierce competition for female customers, the mail order chains cannot afford to offer clothing where it is not predictable whether the customers will really accept the new fashion trends. So now the knee-short skirts, which became generally accepted in 1927, appear in the catalogues.

The short skirts are also worn in the cold season. To protect against the cold, under the skirt pumping panties made of silk or rayon are worn and in the freezing cold also knee socks made of wool.

Winter coats are characterized by rich fur trimmings on the sleeves, on the hem of the coat or especially on the collar. Here the fur trimming extends from the collar to the waistline at the hip. Especially popular is the wearing of fox furs, which are draped around the neck like a scarf. The fox fur consists here of the whole animal; the extremities, the tail and the head. Glass eyes replace the actual eyes and give the flipped fur the appearance of a real animal.

However, the men's coats of the late twenties have in common that they are moderately waisted and very generously cut. Slings are not only used for jackets but also for men's coats.

Shoes for the Gentleman

Leather shoes for the gentleman are square-edged at the tip. Some models are made of two-tone leather. Gaiters are only rarely worn and mostly for formal occasions.

Hats for the Man of Style

Sliding caps are worn by ordinary workers or for sporting activities such as golf. For the summer, the Panama hat made of light straw is the best choice while the gentleman prefers melon, Homburg or your Fedora for the day. The Homburg has a continuous fold through the crown and a very short brim that curves upwards. Cylinders have almost disappeared from daytime fashion and are now reserved for evening wear only. In the Fedora, however, the brim is slightly longer and is bent downwards at the front. A ribbon, sometimes garnished with a bow, decorates most hats. 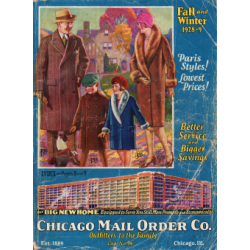 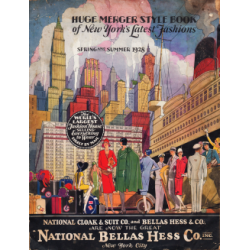 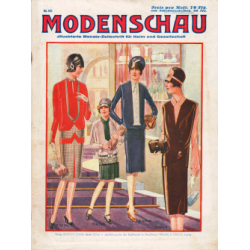 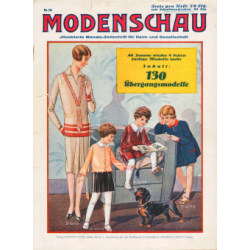 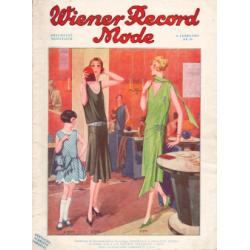 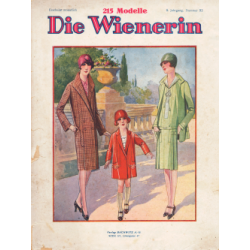